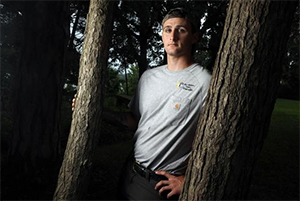 It seemed like those best laid plans were finally coming together and then everything fell off the track.

Anyway, that was the experience of Ryan Roth ’20, who finally landed his dream job with Des Moines County Conservation only to have the National Guard come calling.

The 22-year old Roth is a product of Cedar Rapids and long has been determined to carve out a career in the environmental fields. Even as a teenager, Roth was working on his plan to find a professional path into the woods.

He was an Eagle Scout and believed he had a responsibility to give back to the community. He also knew the path to a career in environmental work began in the classroom.

With his high school years behind him, Roth headed for nearby Kirkwood Community College to earn an associate’s degree in environmental science before enrolling at Upper Iowa in Fayette.

“Upper Iowa had a great program,” Roth said. “And it was affordable. If you enrolled in the bachelor’s program at Upper Iowa and you brought with you an associate’s degree, then they knocked $20,000 off your tuition. It made college possible.”

Even with Upper Iowa’s financial assistance program, Roth found college financially demanding, and that is when he turned to the National Guard.

While in college, Roth earned his Emergency Medical Technician certification, which he learned would be advantageous if he enrolled in the Guard.

“I had at one time thought about going into the military,” Roth said, “because my father had been in for 10 years and I would be following in his footsteps. Plus, with my EMT training, I could go in at an E-4 grade and the extra money seemed pretty good.”

When Roth enlisted, his college days were largely behind him, so he did not avail himself of the Guard’s tuition and housing assistance.

The Guard recognized Roth’s EMT certification, so he entered the service as a combat medic. He attended Guard 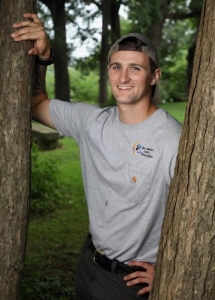 With his high school years behind him, Ryan Roth ’20 headed for nearby Kirkwood Community College to earn an associate’s degree in environmental science before enrolling at Upper Iowa.

training sessions once each month in Oelwein, and for two weeks in the summer he went to National Guard camp.

“As a medic in the National Guard, I could expect to be called up in case of national disasters. That seemed like one way that I could help the community. It seemed to me that being an EMT was a lot like having a hobby but a lot more constructive,” he said.

After his college graduation, Roth had a clear picture of where he wanted to be in environmental work.

“I had decided that what where I wanted to work was as a park ranger. I enjoyed working with the park systems and with people, and this seemed like a great combination of the two. It connected both the natural aspect and the human aspect.”

Park ranger jobs in Iowa are difficult to find, so Roth’s first job after graduation was with a forest management company in the Decorah area. But his job search continued and soon pointed him to Des Moines County, where a park ranger had declared his intention to resign.

Roth applied and was selected. His long held plan was moving forward as he had hoped, but then came notice from his National Guard unit. His mandatory six months service requirement would commence in the fall, and Roth was off to the active military.

“I’ve only been in Burlington for about three months and I am in the process of buying a house in Mediapolis, so everything seems to be happening super-fast,” he marveled. “But it is pretty exciting.

“They’ve told me that initially I will be going to Georgia and then to Texas, and it is hard to say where I will end up after that. It will be a chance to see other parts of the country.”

Roth’s job will be waiting for him when he returns from the military, but he expressed disappointment he will be unable to attend the Iowa Police Academy’s next class that is mandatory for all law enforcement officers. But he should return from his active service commitment in time to attend the following session.

Although his immediate plans have been derailed, Roth still looks forward to taking up his duties as a park ranger and enjoying the area’s hunting and fishing opportunities he has heard so much about — and a career about which he long has dreamed.

(Editor’s note: This article was republished with the permission of writer Bob Hansen, photographer John Lovretta and The Hawk Eye.)