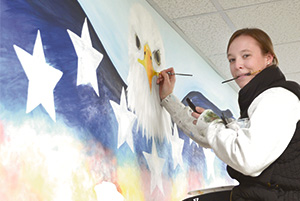 Jamie Vargason has been working on the mural at the Fayette Legion Post for almost two years.

Jamie Vargason may not be Michelangelo but she has taken on a project that to a lot of people, would be on that scale.

Anyone entering the Legion Post in Fayette will be struck by the image that takes center stage the moment you walk in the door. Jamie is painting a 26-foot mural on the south wall of the Legion building that includes a giant eagle and representatives from the branches of the United States military forces.

“This is my biggest work so far,” said the Westgate native who specializes in painting murals. An Upper Iowa University graduate with a degree in Art Education, Jamie does custom artwork when she’s not being a single mom for her three children, being a para-educator at Sumner-Fredericksburg Schools and milking cows.

Besides enjoying the chance to express her creativity, she also has another reason to feel inspired while she works.

“My brother Lyle Buehler is a Legion member here. He served two tours in Iraq. One day someone dropped a bomb in the humvee he was riding in. His buddy, Ross McGinnis, threw himself over the bomb and saved my brother and the four other guys in the humvee. Hearing that story, and saving my brother’s life, really inspired me,” Jamie related.

Although he’s not in the mural yet, Jamie said she plans on adding McGinnis’s image somewhere in the background.

Currently the mural includes figures from the Navy, Army, Marines, Coast Guard, Air Force, and a Legionnaire. The figures are almost life-sized, standing in a grass field with rolling hills in the background and a barn on one side and a UIU building on the other side.

“I wanted to pay some homage to the agricultural aspects of the area and Upper Iowa because I think that what makes the area unique,” she explained.

Towering above the figures is a huge eagle with its wings stretched out over them and a sunrise, with the rays of the sun taking on the stripes of the American flag.

“I met with the Legion members and we discussed what we both wanted in the mural. I knew I wanted an eagle for sure,” she related.

Alumna Jamie Vargason has spent most of her Sundays painting the mural in the Fayette Legion Post. The mural includes five figures representing the branches of the U.S. military, and one Legionnaire.

Jamie has been working on the project for almost two years but she said she wants to do it right. Most of her Sundays are spent putting coat after coat of paint on the wall in order to cover it completely.

“Last Sunday I was here from 8 in the morning to 5 at night. It’s a lot of green and a lot of white and a lot of circles. You don’t realize how many muscles you use just to paint,” she related.

The reaction she’s gotten from most people who see it is “amazing.”

“I’m glad my brother asked me to do this. It’s really something I don’t want to ever be done, because I’ve enjoyed it so much,” she said.

While most of the main features of the mural have already taken shape, Jamie agonizes over the details, most of which would be missed in a casual viewing. But for Jamie she knows she owes the subject the most she can give….close, but never as much as Roy McGinnis.