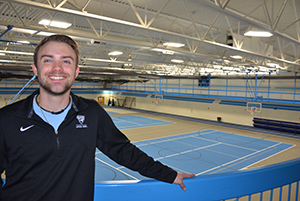 “Everyone involved with the UIU Rec Center wishes to congratulate Ian on his NIRSA state appointment,” UIU Campus Recreation director Adam Carpenter said. “Ian has been a wonderful asset to the staff and has played a key role in the operation of the Rec Center. It is exciting to see him receive such a fantastic opportunity and to grow, not only as a student but also as a recreational professional.”

NIRSA began in 1950 as the National Intramural Association. Eventually, the organization became known as the National Intramural-Recreational Sports Association and held that moniker until 2012. Now recognized as NIRSA: Leaders in Collegiate Recreation, the association has grown to approximately 4,500 dedicated professionals, students and businesses, serving an estimated 8.1 million students in seven regions. Iowa is a member of NIRSA Region V, which also includes Colorado, Nebraska, North Dakota, South Dakota and Wyoming.

“I am very excited to have been chosen to represent the state of Iowa as part of NIRSA,” Bechtel said. “The organization provides the very environment I strongly support and I look forward to joining its leadership team. One of my main goals is getting other students involved with intramural and recreational activities.”

Bechtel graduated with a recreation and sports management degree from St. Cloud State University in 2018. He has served as a UIU graduate assistant for campus recreation since fall 2018.

“There was an obvious adjustment coming to the smaller Fayette Campus, but I was quickly surrounded by a new group of great friends,” Bechtel said. “There is such a terrific working environment here and everyone is very welcoming and supportive.”

Bechtel expects to earn his MSA degree in 2020. Following graduation, his goal is to be employed with a sport club or NCCA Division I institution.