Friendly faces of Upper Iowa University students greet their new “classmates” through the computer screen. Showcasing the beautiful grounds, different activities and campus life, David Stewart, coordinator of the Intensive English program, and his students are bridging the distance between potential UIU students all around the world.

Stewart established the UIU Cultural Bridge Program shortly after his arrival at UIU’s Fayette Campus in 2015. The Canada native came to UIU after teaching English in South Korea for nine years. It was in one of his South Korean elementary classrooms that he first created a video exchange program to help motivate his students to learn English. 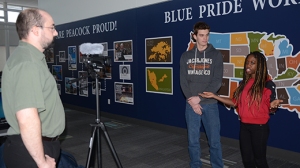 “The Cultural Bridge Program is meant to be mutually beneficial,” said UIU Intensive English Program Coordinator David Stewart. “Our partner schools get a chance to practice their English and learn about American culture and university life, while we get the opportunity to introduce Upper Iowa University and all that it has to offer to students from around the globe.”

“A program like this takes time to develop,” said Stewart. “I send out posters and brochures to all the schools, and those relationships we create mean that, over time, more people will be able to take advantage of the excellent education available at UIU.”

Psychology major Kunal Chopra of Malaysia explains what he enjoys most about attending UIU, while being interviewed by Cultural Bridge member Dosia Kumbe of Nigeria.

When Stewart receives interest from a school to participate in the Cultural Bridge Program, his UIU students make a short introduction video, with subtitles, introducing themselves and the University to their new “classmates.” The video is then uploaded to YouTube as an unlisted video, which means the link is needed in order to watch the video. This helps keep the communication semi-private, but the schools are welcome to share the link with whoever they choose.

The time between video responses varies from a few weeks to a couple of months, based on the flexibility of the school and the time it takes to plan, record, edit and upload the video. Stewart’s goal is to have a reply video sent out within a week of receiving one from another school and to get more student involvement in the creation of the videos.

Georgeen Paisley, a UIU senior from Jamaica, is one of the students involved in making the videos for the Cultural Bridge Program.

“My favorite part of the program is that, along with doing the videos, we also write letters to the students,” said Paisley, who became involved with Upper Iowa’s Intensive English Program while participating in the University’s various welcoming committees for new international students. “I enjoy the fact that we are able to communicate with others from all around the world, and it is always interesting hearing from them.”

Stewart hopes to expand the Cultural Bridge Program to as many as 20 schools, with most of the work being done by the student workers. He is also producing a set of more direct recruiting videos for UIU’s Intensive English Program that will be sent to 50 cities in five countries.