Upper Iowa University honored five alumni as part of the Alumni and Awards Luncheon held Saturday during the University’s “Blue Pride Worldwide” 100thHomecoming celebration. Special recognition was also provided to the UIU Class of 1966 as its alumni members returned to Fayette Campus for their 50th reunion.

President William R. Duffy II presented the 2016 alumni awards to the following honorees for their accomplishments either professionally, as an emerging alumni or through service to the University, community or country.

BeMende initially served as a medic and licensed practical nurse for over 20 years. Achieving senior NCO rank in both the Air Force as a master sergeant and in the Army as sergeant first class, he also earned the Aircrew Member and Master Medical badges. He last served as an adjutant general human resource senior NCO.

The 2016 Service to Country Award recipient earned a bachelor’s degree in human services from UIU.

Dr. Jeremy Johnson was a nontraditional student at UIU and later attended Iowa State University’s (ISU) College of Veterinary Medicine, successfully balancing his studies, work, and caring for his family, wife Allison and two children, while in pursuit of his career goals as a veterinarian.

An Eagle Scout and 2001 graduate of East Buchanan High School in Winthrop, Iowa, Johnson earned a bachelor’s degree in biology at Upper Iowa. While attending UIU he became the only non-ISU student and undergraduate to complete the ISU Dairy Production Immersive Knowledge Experience internship at the Northeast Iowa Community College Dairy Center in Calmar, Iowa.

After graduating from UIU with a bachelor’s degree in health, physical education and recreation, Northern attended two National Football League tryout camps and played semi-professional football with the Cedar Rapids Falcons of the Northern State Football Association League where he was a three-time selection to the All-Pro Team. He also played one year with the Mohawks, a Quad Cities semipro team.

Off the field, Northern has dedicated his time to youth and community projects and organizations in Cedar Rapids, Iowa, and the surrounding area. For 32 years he has been actively involved with the Metro Youth Football Association. In addition, he has served with Big Brothers and Big Sisters, Cryovac Recreation, Babe Ruth Baseball League, Jane Boyd, and the NAACP for two or more decades. He has also been involved with United Way, Junior Achievement, and American Enterprise.

Northern earned his Master of Higher Education degree at UIU in 2012 and for the past decade has continued to support the University during the annual Peacock Golf Classic.

Veryl Sell served two years in the U.S. Army before attending UIU. A 1951 Sumner (Iowa) High School graduate, he was a four-year letter winner on the Peacock football team and earned a bachelor’s degree in physical education at UIU. 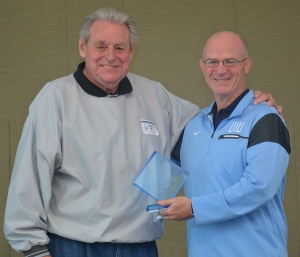 An Illinois high school teacher and football coach from 1961-1994, Sell has served as a collegiate athletic official for approximately 45 years. In addition to serving as a longtime Big Ten Athletic Conference official and technical advisor, he has worked in the Missouri Valley, Metro, Mid-American, Mid-Western Cities, Mid-Continent and former Big Eight conferences.

Sell was a member of the Big Ten Conference Committee that developed instant replay procedures for NCAA Division I football. In 2004, he served as the first replay official to work a college football game.

Off the fields and courts, he has served as a keynote speaker for various athletic banquets, civic organizations, and official’s camps. In addition to being inducted into the 1996 UIU Athletic Hall of Fame, Sell has been named to the Central Officials Association of Chicago Hall of Fame and Illinois Basketball Coaches Association Hall of Fame.

Becky Wadian was recognized for her exemplary service to UIU faculty, staff and students for over 41 years. Prior to her retirement in 2016 as the University’s director of library services, Wadian nurtured the growth of Henderson-Wilder Library to the benefit of students, faculty, staff, and community.

Among her many milestones was implementing the acquisition, configuration and training for the library’s first automation project, which was completed ahead of the Iowa Private Academic Libraries (IPAL) program. Wadian also organized and established the federal depository library of government documents. The inventory and storage she conducted over the years of UIU archival materials was a major contributor to the successful establishment of the University Archives, now located in Henderson-Wilder Library. She also provided collaborative support and leadership in developing UIU’s Tutor Center and computer labs.