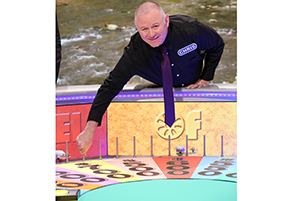 UIU student Christopher Trenticosta won $2,000 during his recent appearance on the Wheel of Fortune.

Christopher Trenticosta, an online Upper Iowa University student from Slidell, La., has been a regular viewer of the Wheel of Fortune since he was a young child. In October, the 43-year-old found himself on the other side of the television screen.

After applying for a spot behind the wheel, Trenticosta explains he auditioned with approximately 50 other individuals in April 2015. A month later he received his selection letter and in September he was invited to the taping of his actual episode.

“The test during the audition process was pretty intense. They don’t give you a lot of time to solve 50 puzzles,” admitted Trenticosta. “But being on stage with all the lights, cameras, letter board and the studio audience was also stressful.”

During the show’s contestant introductions, he soon found himself standing alongside Pat Sajak and eagerly announcing the names of his wife and children, his 19 years of active military service, and his enrollment at UIU.

Starting out strong he correctly guessed the toss-up puzzle, “Taking the Stage,” and won the $2,000 cash prize. Unfortunately, the UIU public administration/emergency management major was provided very little other opportunities to add to his winnings as another contestant swept the remaining puzzles.

“Naturally, I would have liked to have done better than what I did but [the winning contestant] ran away with the show. Once I lost control of the wheel I started to feel like it was over because she was such a great player. She even had Pat Sajak saying, ‘WOW,’” said Trenticosta. “I still enjoyed meeting the other contestants and the experience as a whole was amazing. It was the first time that I had been to Los Angeles and the Wheel of Fortune staff took good care of us.”

Christopher and his wife, Sarah, have three children. A senior supply sergeant in the Joint Forces Headquarters of the Louisiana Army National Guard, Trenticosta said he chose to attend UIU because of the proximity of the New Orleans center to his office and the University’s reputation as a military-friendly school.