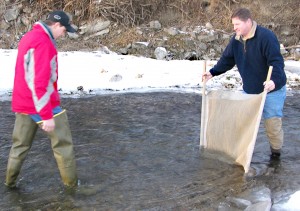 More than 16 years ago, Upper Iowa University’s Delano Professor of Science Rick Klann volunteered his time to “The Long-Term Resource Monitoring Project” – a multi-$100 million federal project aimed at keeping an eye on the water quality of the upper Mississippi River from its source in northern Minnesota to St. Louis, Mo. Since then, Klann has been involved in several water quality improvement projects in eastern Iowa and western Wisconsin. His involvement and Upper Iowa’s affiliation with such projects have been a boon for student growth and development as they gain hands-on, real-world knowledge and application of what they learn in the classroom.

Klann, a parasitologist by training, learned everything about water quality from the Mississippi River project, where he collected samples and monitored the river at seven locations between Lansing, Iowa, and Prairie du Chien, Wis. Local Soil and Water Conservation Districts heard of Klann’s work on the Mississippi River and sought his expertise in helping to evaluate the water quality of several eastern Iowa watersheds.

In 2000, the Clayton County Natural Resource and Conservation Service (NRCS) approached Klann to provide an evaluation of whether or not NRCS and federally funded land-use improvement practices were having any effect on the water quality of streams and rivers in northeast Iowa. His first project was Ensign Hollow, a trout stream just across the Fayette County border in Clayton County, Iowa. Since then, he has conducted several studies with the Fayette County NRCS office on Grannis Creek, Mink Creek, Otter Creek and is in the last year of a study on Nutting Creek.

Since 2005, Klann, along with Upper Iowa University student researchers, has been monitoring the water quality of the North Fork of the Maquoketa River watershed. “The Maquoketa River gets a lot of bad press because it’s a huge watershed emphasizing intensive agriculture, but there’s just that one little stream draining through it and it carries a lot of nitrogen and phosphorus into the Mississippi River. The greatest water quality challenges faced by streams in Iowa are overloading with sediment and nutrients,” said Klann.

Farmers in the area, along with Iowa State University Extension, formed an organization to help tackle the issues related to field runoff into the river. Excessive amounts of nitrogen and phosphorus were dumped into the river via tile lines and cattle pastures. In addition to implementing typical land-use improvement practices such as buffer strips and grass waterways to filter the runoff and limit erosion, landowners have been testing out a new approach by installing bio-reactors at the end of the tile lines to filter the nutrients out of the water existing. Klann’s job was to monitor the water going into the reactor and the water coming out. He discovered that the reactors were doing an excellent job, pulling up to 90 percent of the nitrogen from runoff. Next year, Klann expects the project to get bigger as more bio-reactors are installed.

Students who assist with water quality monitoring projects can use the findings for their own student-research projects, as well as learn valuable skills. Monitoring watersheds can be time-consuming. Klann and a student researcher sample most sites once a month and within 24 hours of a significant rain, which is six-tenths of an inch or more (“A body of water can change significantly after a rain,” said Klann.) They take samples in the field, including temperature, conductivity, dissolved oxygen, pH and turbidity. In the lab, they measure suspended solids, total nitrogen, total phosphorus, fecal coliform bacteria, and for some projects, Klann and his student assistant will conduct a benthic macroinvertebrate survey which samples the organisms living on the bottom. “Some can tolerate poor water quality and some can’t,” added Klann. “It gives you a good indicator about what is going on in the watershed.”

In addition, Klann publishes his research and makes presentations on the importance of water quality.

Through water quality monitoring, Klann has seen several positive changes. He counts Mink and Nutting creeks as a couple of successes. “Mink Creek showed great improvement, which had been a trout stream that was seeing very little use by anglers because the trout weren’t surviving,” he said. “Nutting Creek also showed positive changes. These improvements all came about because of the implementation of land-use improvement practices.

“In Iowa, we use so much fertilizer to generate high yields. The nitrogen soaks down into the groundwater.  Trout hatcheries have to treat the spring water before they can add it to the hatchery. It shouldn’t be like that, but it is because so much nitrogen has seeped into the spring water.”

Klann said that he will continue to provide quality and inexpensive monitoring to state and local agencies as he continues to learn more about the water quality of northeast Iowa while providing unique opportunities for student research. 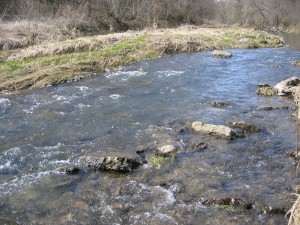