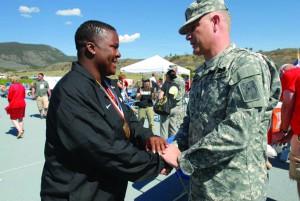 Throughout high school, Ray Chandler was in danger of flunking out. He spent his summers in school trying to make up for the credits he missed during the year. He barely graduated and entered the workforce right away. Chandler described himself as listless back then.

One night, he stayed up to watch a 1943 classic – the movie Sahara, starring Humphrey Bogart. In it, Bogart stars as U.S. Army Master Sergeant Joe Gunn, a U.S. tank commander in Libya during the Western Desert Campaign of World War II. Chandler thought it looked interesting, so he decided to talk to a recruiter for the U.S. Army. At 19-years-old, he enlisted as a tank crewman.

He didn’t immediately go to basic training, however. Faced with the fact he had just made a major decision to join the military, Chandler tried to forget that commitment. The Army had other plans – his recruiter tracked him down and reminded him of his enlistment contract and the oath he took.  Chandler relented and, after his initial training, was stationed in Germany.

After six months, he realized he had made the right decision after all. “I knew this was what I would do for the rest of my life,” Chandler said.

In March 2011, Chandler was sworn in as the 14th Sergeant Major of the Army.  From at-risk teenager to the highest ranking enlisted member of the U.S. Army, Chandler’s story is one of inspiration for everyone who questions their instincts.  He’s followed his own instincts, which ultimately led him to Upper Iowa University.  In 2009, he earned a bachelor’s degree in public administration from the UIU Fort Leavenworth Center, and he continues to speak to soldiers about the importance of higher education today.

“Within the Army, we put a great deal of emphasis on civilian education,” he said. “As an enlisted soldier, it’s not a requirement.  You don’t have to get a degree, but it’s a good thing to do. From a military perspective, it’s about being with people who don’t necessarily think like you, and (education) expands your understanding of the world and how things work. It is critical for soldiers to expand their knowledge base beyond the military education system. Especially in this era of persistent conflict that we’re in – an understanding of a different viewpoint or opinion helps you to be more agile and adaptive. A college education is extremely important today and in the future.”

For Chandler, obtaining a college degree was important for his role as he works with civilians and military personnel alike. He originally began his college education in 1982 when he was stationed in Germany, but took a break for several years.  In 2005 he chose Upper Iowa University to finish the degree when he was stationed at Fort Leavenworth, Kan., at the age of 43. He was able to test out of a number of courses due to his military experience and knowledge.

Chandler acknowledges how tough it can be for any soldier to juggle the rigors of school, work and family in order to earn their college degree. “Balance is extremely important, and it’s so easy to lose that sense of balance. I tried to limit how many courses I was taking at one time,” he added. “I think what is important is to have a long-range goal that is achieved. I knew that if I took one class per term, I could maintain a sense of balance between my professional life, my personal life and my educational goals.”

Chandler knows firsthand what soldiers in this persistent era of conflict experience and deal with when they come home. In 2004, during his first deployment to Iraq, he was injured when a rocket exploded near his room. He said the incident “really had a fundamental change in my approach as a soldier and negatively impacted my family until eventually I got help.”

Chandler was faced with the realization that he was not infallible or immune from danger. “The most challenging time in my military career was understanding that I had post-traumatic stress, and realizing the impact that is was having on me and my family,” he said.

“The Army has a way of building that tough guy in you – that goes for all soldiers,” he added. “You know you’re a warrior and you’re going to help your team and look out for your battle buddy, and it gives you a sense that you can do anything.

“When you’re in that combat experience and your unit is being successful, you’re doing all the things you’ve been trained for your entire military career. Then you are faced with adversity like death and injury.  How you react to that is really important. There are some things that you can’t control no matter what you do. You cannot change who decides to fire a rocket and when and where it lands. You ar 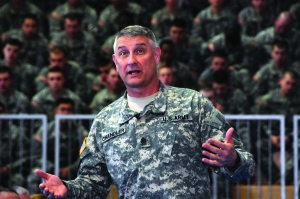 e faced with your own mortality, and you have to really make decisions on how you’re going to handle that situation.”

After avoiding behavioral health care for almost four years after his return from Iraq, Chandler made the decision to seek help.  For about two years, he sought help – sometimes twice a week.  He said the counseling he received not only changed his life for the better, but it also enabled him to reach out to others who face the same challenge.

These days, Chandler travels to U.S. Army locations around the world and helps prepare soldiers to overcome a variety of challenges.  It doesn’t matter if the topic is post-traumatic stress, sequestration or reducing the size of the Army, he reassures audiences that they will succeed. “Our Army has done everything the nation has asked of us for the past 12 years – and we’ve succeeded,” he said.  “I tell them I trust that they will do the same as our Army goes forward.”