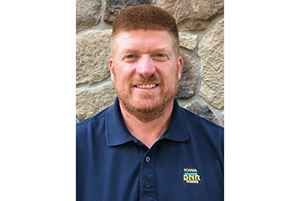 “Pete is a natural fit for the job—with his outstanding leadership skills, knowledge and passion for the DNR and Iowa’s natural resources—I have high confidence he will continue to lead the Conservation and Recreation Division of the Department to new heights,” said Lyon. “His calm and inviting personality, along with a proven record of communicating effectively and building trust with the public, will help us navigate some very critical and important issues to continue to enhance and preserve our natural resources.”

Hildreth began his career with the Iowa DNR in 1999, working as a seasonal employee in the Wildlife Bureau. He also worked in the Fisheries Bureau as a seasonal employee before being hired full time in 2004 as a Natural Resource technician at the Prairie Lakes Wildlife Unit in Ruthven. In 2010, he was promoted to a Natural Resource biologist working on many projects including Black Hawk Lake, Lizard Lake and Little Storm Lake wildlife management areas. Hildreth has served as the Southwest District Wildlife supervisor for the Wildlife Bureau since 2013.

“The opportunity to serve and represent the men and women of the Iowa DNR’s Conservation and Recreation Division (CRD) is an absolute honor,” said Hildreth. “I look forward to working with the CRD staff to provide the support needed to manage Iowa’s natural resources in perpetuity for the citizens of Iowa.”

Hildreth was born and raised in Des Moines, Iowa, and graduated from Dowling Catholic High School in 1997. He learned at an early age that he enjoyed being outdoors and the importance of nature. He graduated with a Bachelor’s of Science degree in conservation management from Upper Iowa University in 2001.

Pete and his wife, Amy, and the couple’s three children are looking forward to moving to the Des Moines metro area. In his free time, Hildreth enjoys Muskie fishing. He has caught and released 305 Muskies while fishing in Iowa.

Hildreth’s appointment comes after the retirement of Dr. Dale Garner in late September 2020.

The Conservation and Recreation Division serves a large portion of the IDNR, including the Wildlife, Fisheries, Law Enforcement, Engineering, Land and Waters and Parks, Preserves and Forests bureaus.