Upper Iowa University Delano Professor of Science Dr. Katherine McCarville will present “A New Look at the Iowan Erosion Surface as a Megaflood Landscape” during a pair of programs in Fayette on Thursday, January 24. The free public

presentations summarize and explain a unique interpretation of the intriguing features of the Iowan Surface Region of northeast Iowa. Upper Iowa students have been involved with the research project and their contributions are included in the program.

“The Iowan Surface landform region is an area of low relief, covered in a mantle of loamy sediments above a distinctive coarse-grained sand or gravel base,” McCarville said. “Early workers described water-laid sediments, but later interpretations have called upon glacial processes, periglacial processes, or soil formation to explain this enigmatic landscape.”

She further explained the geomorphic features of the Iowan Surface, including extensive boulder trains, areas of exposed bedrock, deeply incised bedrock gorges, amphitheater-headed canyons, streamlined paha hills, and the distribution of loess, resemble similar features found in the Channeled Scablands of eastern Washington and other landscapes now recognized as having been shaped by megafloods.

As part of the program, McCarville reports the proximity of Glacial Lake Agassiz, the location of its southern outlet, and the alignment of Glacial River Warren and the modern Minnesota River with the dominant northwest-southeast fabric of the modern drainage network of the Iowan Surface suggest a possible source of floodwaters. In addition, the Big Stone moraine and other glacial deposits, and exposed and eroded bedrock in southern Minnesota, may have been the source of sandy sediments and giant erratic boulders of the Iowan Surface region. 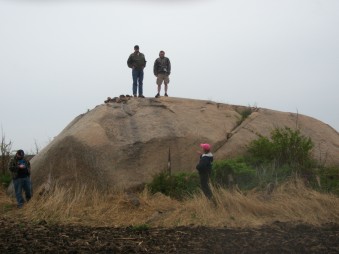 Although most of their erratic boulder research originally took place in Fayette County, Upper Iowa University’s Iowan Surface Erratics Research Group has extended its studies throughout northeast Iowa and southeast Minnesota. UIU Professor of Geosciences Dr. Katherine McCarville (lower right) is pictured with a few of her student researchers at the site of a glacier erratic boulder, located west of Nashua, Iowa.

The January 24 presentations are scheduled for 1 p.m. in the Liberal Arts Auditorium at UIU’s Fayette Campus and at 6:30 p.m. at the Fayette Community Library. The 1 p.m. program will be held in conjunction with UIU’s Introduction to GIS class, taught by instructor Chad Goings.

McCarville has roots in the midwest but grew up in California.  She studied geology at UCLA as an undergraduate, and worked as a uranium miner in Wyoming after graduation.  She took a masters degree in geology Colorado School of Mines, working on uranium deposits in the Red Desert basin of Wyoming, and then worked for a number of years in computing and networking technologies at universities and for engineering consulting firms.  As a Bush Foundation Leadership Fellow, she did her doctoral work in avian paleontology of Fossil Lake, Oregon, at the South Dakota School of Mines.  Her work resulted in revision of the interpretation for the locality.

McCarville currently coordinates UIU’s environmental science degree program, which is strongly field-based.  She teaches a wide variety of courses in geosciences and geography, including soil genesis, geomorphology, and hydrogeology, most of which have an outdoor component.  Her interests span the earth and environmental sciences and often cross disciplinary boundaries.  Her current research centers on the role of disturbance in prairie ecosystems, and the origins of the Iowan Erosion Surface.

An advocate for diversity in STEM, Kata serves as UIU Campus director for the Louis Stokes Alliance for Minority Participation in STEM disciplines, and as co-principal investigator on an NSF-funded project called STEM-Pros: Growing More STEM Professionals in the Heartland.

McCarville will host two other programs at the Fayette Community Library in the coming months. The UIU professor will present “Pilgrimage: A Journey on the Camino de Santiago de Compostela” on Monday, March 25, and “Geology and the Terroir of Iowa Wines” on Tuesday, May 7. Both programs are currently scheduled to begin at 6:30 pm.