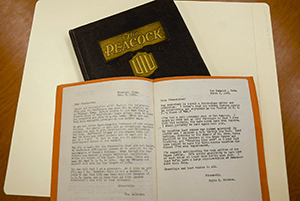 Social media has made it much easier for graduates to remain in contact with classmates, faculty and staff following commencement. However, one piece of history located in Upper Iowa’s University Archives is a great example of how college friendships and a devotion toward UIU developed and endured even before today’s electronic technology.

The “Class of ’26: UIU 1929 Class Letter” was created by class member Reuel D. Reif of Bismarck, North Dakota. According to the hand-typed booklet,

Reif also apparently compiled and printed Class of ’26 letters from 1927-1928. The 1929 edition contains 26 letters from the 1926 graduating class, including that of alumna Emma Hough of Sumner who was the last living member of the class before her death in June 2016. In addition to sharing information about their families and careers, the graduates conveyed their thoughts about events of the time that had impacted their alma mater and their hopes for its future.

Although the “Crash of ’29” had not yet occurred by the time the letters has been compiled, UIU had already experienced a few discouraging moments in its history following the graduation of the class of ’26. According to the archives, the university lost North Central Association accreditation because of a “failure to meet the 1927 financial requirements.” The Science Hall burned to the ground at the end of the same year. Faculty, staff and students were able to save equipment, but insufficient water pressure would not allow firefighters to save the structure.

In April 1928, a special Upper Iowa Conference Committee recommended UIU merge with Cornell. Needless to say, UIU did not accept the recommendation that would have transferred all students and funds, including proceeds from the sale of Fayette Campus, to the college located in Mount Vernon, Iowa. A few months later, the University became a private institution after separating from the Methodist Episcopal Church, which had initially helped maintain and support UIU.

Exhibiting their heartfelt support for UIU faculty, staff, and administration, many of the alumni commented on looking forward to a return visit to Fayette Campus, while others shared regrets that they would be unable to attend the 1929 commencement ceremony. The following are portions of select letters shared between participating classmates.

Maybelle Gassett, formerly of Fayette: I was certainly glad

when the trustees made Doctor Dickman president of our Alma Mater. If anyone deserves that position Doctor Dickman did. Would certainly like to roam the halls again, whisper in the “lib” and skip chapel to get the mail.” – Hospers, Iowa, February 25, 1929

Neil Pierce, formerly of Brazil, Indiana: “I was proud to hear that everyone [in] our class had pledged something to the campaign fund, with such support Upper Iowa should come out on top.” – Clinton, Ind. March 23, 1929

Lorna D. Bates, formerly of Arlington, Iowa: “We have five Upper Iowans on our high

school faculty so we hear most of the UIU news. Vera Decker is my roommate and we get up to Fayette often. It seemed so good to see everyone at Homecoming. Here’s hoping we’ll all be back for Commencement.” – Lamont, Iowa, March 5, 1929

Celia Morf, formerly of Fayette: “I’m not teaching this year and don’t plan to next year. I’m working in the State Bank here at Fayette, and enjoy the work very much. I’m especially thrilled about it tonight because I got the promise of a raise of $25.00 per month; which is not at all unattractive…. Let’s all do our best to be in Fayette for Commencement. The old school needs our support and loyalty.” – Fayette, Iowa, February 28, 1929

Glenn Hartong, formerly of Nora Springs, Iowa: “We are still wondering what the

year 1929 will bring to the Institution that gave us a new birth and a new outlook in the realm of human living. We ought to be mightily concerned about her future existence and welfare, and stand as an impregnable fortress to stay the hand that has so recently threatened her very existence. I shall graduate from Garrett Biblical Institute this June. If I respond to the call of the mountain lion, which I plan to do at present, my next year’s class letter will be sent from the wilds of Oregon. – Evanston, Ill., Feb. 5, 1929

The “Class of ’26: UIU 1929 Class Letter” can be viewed at the University Archives at UIU’s Fayette Campus. Currently, alumni and other members of the Peacock family can also purchase select yearbooks from the 1900s for a nominal fee. For additional information, contact UIU Archivist Janette Garcia at (563) 425-5722 or garciaj26@uiu.edu.