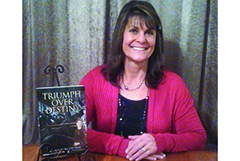 Oelwein, Iowa, author and Upper Iowa University (UIU) alumna Peladija Woodson-Diers will share the story of her parent’s experiences during World War II in Nazi Germany during a special program on the UIU Fayette campus on Thursday, Nov. 12.

During a special program at Upper Iowa University on Thursday, Nov. 12, author Peladija Woodson-Diers ’90 will share the compelling true story of her parents fleeing World War II’s Nazi Germany. The program is scheduled to begin at 6:30 p.m. in UIU Andres Center for Business and Education Room 104 on the Fayette campus.

Born in the United States, Woodson-Diers earned a bachelor’s degree at UIU before receiving a master’s in social work. A licensed independent social worker living in Oelwein, Iowa, her book, “Triumph over Destiny,” recounts the tragedies and triumphs experienced by her parents during World War II.

“Triumph over Destiny” is written from the perspective of the author’s mother, Karoline. Karoline’s personal experiences included being ripped from her family at the age of 15 years old, placed in forced labor and suffering tragedies unimaginable while living in Germany, marriage to a German soldier, raising two daughters, marrying a POW following the war, and eventually coming to America while being sponsored by a family in Oelwein.

The Nov. 12 public program is being coordinated by Phi Chapter of Delta Kappa Gamma, a women teachers’ education organization in Fayette and Buchanan counties, along with Upper Iowa University. Copies of “Triumph over Destiny” will be available for purchase and to be autographed by Woodson-Diers at the free event.